While a 401(k) provider generally prepares the Form 5500, employers should still understand the filing requirements for their 401(k) plan - otherwise, substantial penalties and avoidable plan expenses are made more likely.  This knowledge can also help employers monitor their 401(k) provider – an important fiduciary responsibility – to confirm they’re preparing the Form 5500 timely and competently.

What are an employer’s Form 5500 filing requirements?

The government’s Form 5500 series includes 3 versions.  Generally, the Form 5500 version a 401(k) plan must file for a year is based on its participant count.  A description of each version - and when it must be used – is below. For more information, see the DOL’s Reporting and Disclosure Guide for Employee Benefit Plans. 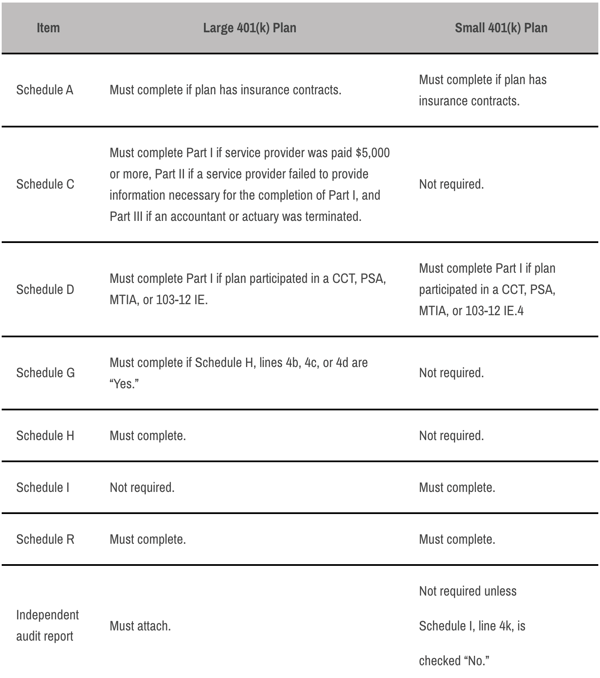 When must an audit report be filed with the Form 5500?

Large 401(k) plans (and small 401(k) that don’t meet the DOL’s audit waiver requirements) must file an independent audit report - prepared a third-party Certified Public Accountant (CPA) – with their Form 5500.  This report must include an opinion by the CPA regarding the plan’s financial statements - specifically, whether they have been fairly presented in accordance with U.S. Generally Accepted Accounting Principles (GAAP).

A 401(k) plan have a full-scope or limited-scope audit.  Under a limited-scope audit, the CPA does not audit the plan investment information certified “complete and accurate” by an eligible asset trustee or custodian – which generally makes this audit type less expensive.

An audit can add thousands of dollars to the cost of filing a Form 5500, so employers typically try to avoid this requirement by keeping their 401(k) plan’s participant count as low as possible.  A popular way to do that is cashing out small account balances related to terminated plan participants.

This rule makes it possible for large 401(k) plans with between 100 and 120 participants to avoid the audit requirement.

What is the deadline for filing a Form 5500?

The filing deadline for the Form 5500 is the last day of the seventh month following a 401(k) plan’s year-end (July 31 for calendar-year plans).

Can the Form 5500 filing deadline be extended?

Yes.  An employer can apply for an automatic 2 ½ month extension of time to file their Form 5500 by filing a Form 5558 (extending the filing deadline to October 15 for calendar-year plans).  The Form 5558 must be filed before the due date of the Form 5500.

What are the penalties for not filing the Form 5500 timely?

Unfortunately, most employers don’t realize they missed a Form 5500 filing until they receive a letter from the IRS or DOL about it – which can be a year or more after the 5500 was due.  By that time, substantial penalties will have already accrued. Late Form 5500s are subject to the following IRS and DOL penalties:

However, employers who have not yet been notified by the DOL about their missing Form 55500 can file a late return using the DOL’s Delinquent Filer Voluntary Compliance Program (DFVCP) to pay a lower, flat penalty amount.

Are Form 5500s filed in the past publicly-available?

Must Form 5500 information be disclosed to plan participants?

Yes. Participants must receive a Summary Annual Report (SAR).  The SAR is a summary of the Form 5500. It must include the following information:

The deadline for distributing the SAR to plan participants is the later of: 1) nine months after the end of the plan year or 2) two months after the Form 5500 was due (if an extension has been granted by the IRS).

Understanding Form 5500 filing requirements can save an employer big bucks!

Because a 401(k) provider generally prepares the Form 5500, meeting this annual filing requirement is generally a simple process for employers.  And yet, not filing a Form 5500 timely is one of the most common 401(k) administration mistakes made by employers – triggering potentially substantial penalties.

Receive helpful information like this directly in your inbox by subscribing to The Frugal Fiduciary Small Business 401(k) Blog!