Automatic Enrollment – Is It Right for Your Small Business 401(k) Plan?

Last year, we studied the plan designs of 2,767 small business 401(k) plans that averaged approximately 25 participants and $1M in assets.  We found only 8.71% of these plans automatically enroll eligible employees who fail to make their own affirmative enrollment election.  In contrast, a 2014 Willis Towers Watson study found 68% of 457 larger 401(k) plans include an automatic enrollment feature.

While automatic enrollment can be a great tool for a 401(k) plan to increase employee participation, plans that don’t need the help should avoid the feature.  That’s because it adds annual administration responsibilities that can be expensive to fix if done improperly.  If you’re considering automatic enrollment for your 401(k) plan, you’ll want to understand these requirements to determine whether feature’s benefits will make them worthwhile.

What are the different automatic enrollment types?

There are three basic types of automatic enrollment arrangements, each with different features and requirements. 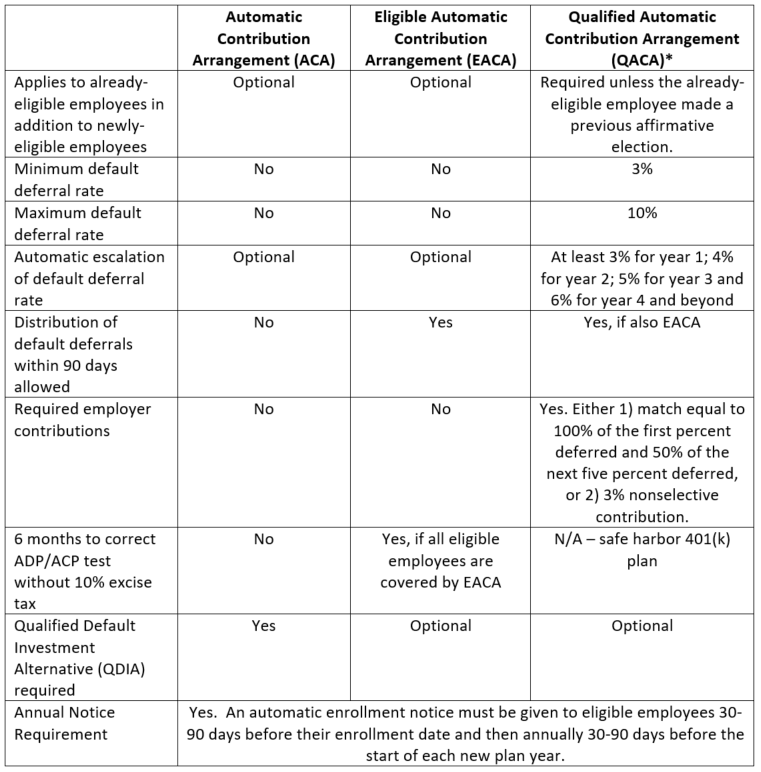 *A QACA is a type of safe harbor 401(k) plan.  Because they include an automatic enrollment feature, these safe harbor plans are permitted to offer a less costly match (3.5% instead of 4%) and a longer vesting schedule (2-year cliff instead of immediate) than traditional safe harbor plans.

An automatic enrollment feature adds 2 major administration responsibilities to a 401(k) plan:  1) distributing a notice that describes the feature – which participants must receive before they become plan-eligible and then annually before the start of each new plan year – and 2) enrolling participants that fail to make their own affirmative enrollment election by default.

If a 401(k) plan’s automatic enrollment feature includes an escalating default rate (commonly called an “escalator”), the employer must also remember to increase the default deferral rate for automatically enrolled participants each year.

These additional requirements are not particularly onerous, but making a mistake can take a lot of effort to correct.

The consequences for making mistakes

Regardless of when an automatic enrollment mistake is corrected, an employer must also do the following to complete the correction:

Do you really need it?

No employer gets style points for administering 401(k) features they don’t need.  While automatic enrollment can be a powerful tool for increasing employee participation in a 401(k) plan, not all plans need the help – especially safe harbor plans.

If your plan doesn’t have trouble with employee participation, you want to avoid automatic enrollment.  The feature adds administration that can be expensive to fix when mistakes are made.