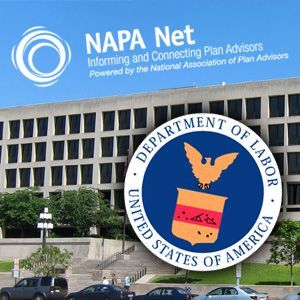 NAPA stakes a position against the DOL’s fiduciary rule

This month, the DOL is expected to propose a “fiduciary rule” for financial advisors that provide investment advice to retirement plans. This rule, also called the “conflict of interest rule for investment advice,” would subject brokers to the same fiduciary obligations as investment advisers. The DOL proposed a fiduciary rule in 2010, but that proposal was withdrawn in 2011 under heavy pressure from some lawmakers and lobbyists representing the financial services industry.

Currently, investment advisers and brokers are subject to different standards of client care. Investment advisers are subject to a fiduciary standard. This standard requires investment advisers to place client interests first, avoid conflicts of interest, carry out their duties prudently, and pay only reasonable expenses. On the other hand, brokers are governed by a suitability standard. This lesser standard requires brokers to make recommendations based on their client’s circumstances, needs and objectives. The rule does not set standards around conflicts of interest or require brokers to place client interests before their own.

The differences between these two standards can have huge implications for small business retirement plan sponsors and participants. While financial advisors may or may not be a fiduciary, a plan sponsor is always a fiduciary to their retirement plan. This means sponsors must independently evaluate broker advice for fee reasonableness and conflicts of interest – a difficult job for most sponsors – or risk personal liability. Since broker advice is not required to consider fees, plan participants may end up paying excessive investment fees. This is an important consideration because excessive fees can dramatically reduce a participant’s account balance at retirement.

In my opinion, when you pay a financial advisor for investment advice, they should work in your best interest and not theirs. A fiduciary rule is a common sense reform for America’s retirement plan system, but a growing number of powerful industry groups disagree.

Recently, NAPA came out publicly against a fiduciary rule. In an e-mail solicitation for Political Action Committee (PAC) contributions, the group wrote “Such a rule that will block American savers from working with the financial advisors and investment providers they trust. Claiming they are acting in the interest of protecting investors from "conflicts of interest," Washington bureaucrats say that if financial advisors and investment providers offer products with different fees they will always unfairly steer investors to the products with higher fees. They make this claim even though financial advisors and investment providers are already subject to a standard of fair dealing and a strict requirement that all recommendations be suitable for the investor, all of which is subject to audit and enforcement by the Financial Industry Regulatory Authority (FINRA).”

In my opinion, NAPA is missing the point of a fiduciary rule. In proposing their rule, the DOL is not saying brokers will “always” place their personal interests first by steering investors to the products with higher fees. Instead, they are saying it’s too easy for unscrupulous or incompetent brokers to steer investors to products with higher fees under the current suitability standard.

NAPA joins other powerful groups representing the financial services industry, including SIFMA and FSI, in opposing the DOL’s fiduciary rule.

Are Opponents of a Fiduciary Rule Fear-Mongering?

FSI says re-categorizing brokers as fiduciaries will have “significant consequences, including increased liability exposure and the elimination of commissions as a viable form of compensation for those who provided advice and support services, absent exemptive relief. If the DOL’s proposal were adopted, many broker-dealers and financial advisors would be forced to withdraw from the market of advising Covered Plans, their participants, and IRA investors, thereby dramatically reducing access to these critical services.”

SIFMA makes a similar argument against a fiduciary rule. They say the rule will “limit investment choices and drive up costs for the individuals it is intended to protect.”

A David vs. Goliath Fight

While powerful industry groups with great influence in Washington oppose a fiduciary rule, smaller groups are advocating for it, including NAPFA and the Institute for the Fiduciary Standard. A coalition of retirement, union and consumer protection groups, called Save Our Retirement, was also recently formed to help fight for the rule.

While these groups don’t have the money or the clout of the groups that oppose the rule, it appears the Obama administration is standing its ground in this fight. A recently leaked White House memo indicates the new DOL rule will retain many of the consumer protections contained in the withdrawn 2010 rule - it will still guard against conflicts and avoid “certain self-dealing transactions,” but won’t ban commissions.

I am a NAPA member, so I’m hopeful the group will re-think its position on the DOL’s fiduciary rule. Investment advisers prove every day that small business retirement plan sponsors and participants don’t need to pay more for conflict-free advice.