Providers of Multiple-Employer 401(k) Plans (MEPs) – a form of 401(k) plan co-sponsored by two or more unrelated employers - have had a rough time in the courts in recent months. Three providers - ADP, Pentegra, and TriNet - have been accused of charging excessive 401(k) fees, while two others – Insperity and National Rural Electric Cooperative Association (NRECA) - have paid out tens of millions of dollars in restitution. Because providers usually market MEPs as a lower-cost alternative to single-employer 401(k) plans, these lawsuits can seem surprising. I’m not surprised one bit.

Ironically, another purported MEP benefit is the reason why. When business owners join a MEP, they delegate most (if not all) of their traditional 401(k) fiduciary roles to the provider. MEP providers claim this delegation reduces the fiduciary liability of business owners. I think it does the opposite by giving providers too much discretionary control over plan administration. They can abuse this power by layering administration fees or choosing overpriced investments and features for plan participants. Many do just that.

It’s no secret I don’t like MEPs. They don’t lower 401(k) fees – a single-employer plan with an index fund menu and flat administration fees can cost much less – and they’re too prone to abuse. The fiduciary roles that make MEPs more prone to abuse are described below – including how providers can abuse each role.

The fiduciary hierarchy of all 401(k) plans

All 401(k) plans (MEP or not) have the same basic fiduciary hierarchy. An org chart of this hierarchy can be found below. It includes both fiduciary and non-fiduciary (“ministerial”) roles. In general, the fiduciary roles have discretionary authority, while the ministerial roles do not. The blue boxes indicate roles traditionally filled by an employer, while the other boxes indicate roles that are most often filled by a professional service provider.

Technically, you can delegate any of these roles to a willing 401(k) provider. However, you can’t just delegate a role and forget about it. You must ”monitor” the delegate’s role performance - to ensure they’re doing a competent job for “reasonable” fees. 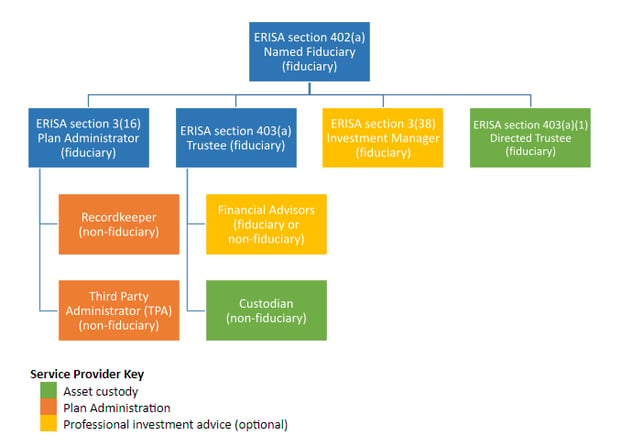 The 401(k) fiduciary roles most prone to abuse

In general, the 401(k) fiduciary roles traditionally filled by business owners have the broadest discretion. That’s exactly the reason why I don’t think business owners should delegate them to their 401(k) provider (MEP or not). Their broad authority makes them more prone to abuse.

For nearly 10 years, the financial services industry has lobbied Congress hard to expand small business access to MEPs. This push is hardly surprising when you understand how their purported benefits can be a red herring to boost profits.

The industry got what they wanted in 2019 when the SECURE Act created Pooled Employer Plans (PEPs) – a form of MEP. Will these plans offer more safeguards against abuse by PEP fiduciaries? Given how excited the industry is about PEPs, I very much doubt it.