Pooled Employer Plans (PEPs) and Multiple-Employer Plans (MEPs) are considered pooled 401(k) plans because they pool the 401(k) assets of multiple employers. Supporters claim that pooled plans pay lower fees for high-quality administration services and investments due to “economies of scale.” In truth, a single-employer plan with flat (participant-based) administration fees can cost less. The reason why is the asset-based fees charged by pooled plan providers. Asset-based fees can get excessive fast as participant balances grow.

Recently, our firm evaluated the fees paid by a 4-participant pooled 401(k) plan with $670,268.16 in assets. Here’s what we found and how the fees compare to a single-employer plan with flat administration fees.

There is no such thing as a free 401(k) plan. All 401(k) providers charge fees for delivering plan administration services. When these fees aren’t paid by the employer, they are paid from plan assets. These fees can be direct or indirect in nature. The primary difference is who pays them.

The pooled 401(k) plan we evaluated has three major service providers – Transamerica, TAG Resources, and Mesirow. Their fees are summarized in a TAG Resources 2022 Fee Schedule. Almost all of them are indirect.

The small amount of direct fees can make the pooled plan seem low-cost. In truth, almost all the fees charged by Transamerica, TAG Resources, and Mesirow are paid by plan investments based on a percentage of assets.

TAG Resources is the pooled plan’s Third-Party Administrator (TPA). A TPA manages the day-to-day operation of a 401(k) plan. Below are the TPA services listed in the TAG Resources 2022 Fee Schedule. 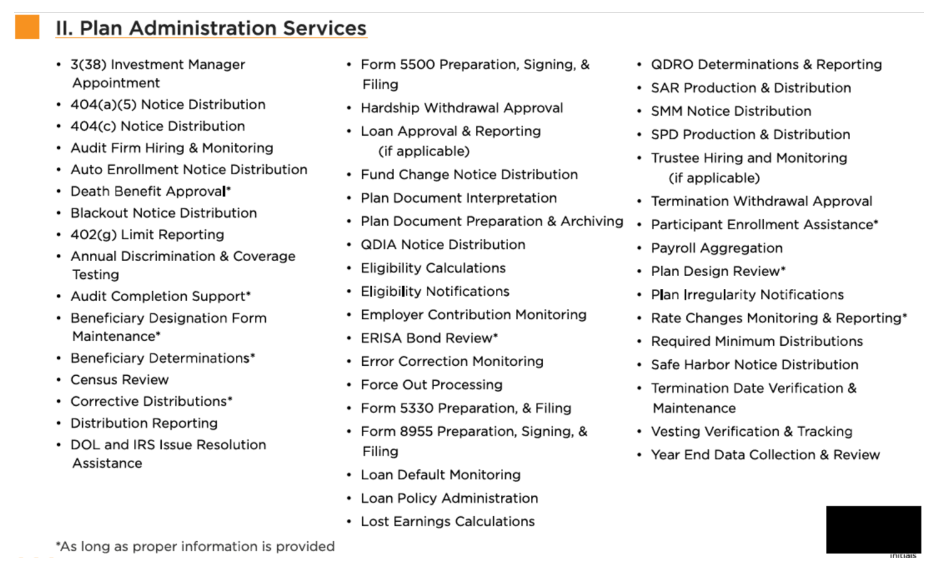 According to the TAG Resources 2022 Fee Schedule, TAG charges the following fees for these services:

401(k) fees reduce the investment returns of plan participants dollar-for-dollar when paid from plan assets. Given the stakes, employers have a fiduciary responsibility to keep their amount “reasonable.” I recommend that employers take this responsibility a step further by lowering their 401(k) fees as low as possible. Doing so can add tens of thousands of dollars to participant balances over time due to the power of compound interest.

To demonstrate the savings possible with flat fees, let’s compare the pooled plan’s annual administration fees to Employee Fiduciary fees for a comparable plan. We found that the average participant would save $487.84 in fees ($996.89 - $509.05) annually.

If plan assets grow to $1 million, the savings will be even greater due to the higher percentage of asset-based fees paid by the pooled plan.

Asset-Based Fees are a Big Problem with Pooled 401(k) Plans!

When supporters claim that pooled 401(k) plans cost less than single-employer plans, they mean as a percentage of assets. This is often true. However, 401(k) plans have no obligation to pay asset-based fees for recordkeeping and TPA services. They can pay flat fees instead.

In our experience, 401(k) plans that pay flat administration fees for recordkeeping and TPA services cost less than plans that pay asset-based fees – even pooled plans. I dare anyone to prove otherwise.

The kicker? As direct fees, flat administration fees can be paid from a corporate bank account instead of plan assets – resulting in higher returns for participants and a tax deduction for business owners.

Want to suggest a blog topic you'd like me to talk about? Request it here.