According to AARP, Americans are 15 times more likely to save for retirement when they can do so by payroll deduction through a 401(k) or other workplace retirement plan. However, while most large businesses – companies with more than 100 employees – sponsor a retirement plan, 51 to 71 percent of small businesses don’t. In recent years, Multiple Employers Plans (MEPs) have been floated as a way to close this small business coverage gap. I disagree for a simple reason - MEPs fail to address the specific reasons why small businesses don’t offer a retirement plan today. I think single-employer 401(k) plans modeled after the Federal Thrift Savings Plan (TSP) paired with tax credits would do a better job.

Without a government mandate, the small businesses must want to cover their employees with a retirement plan. According to recent Pew study, the factors most likely to motivate an employer without a retirement plan to establish a plan are better profits, tax credits, and employee demand. 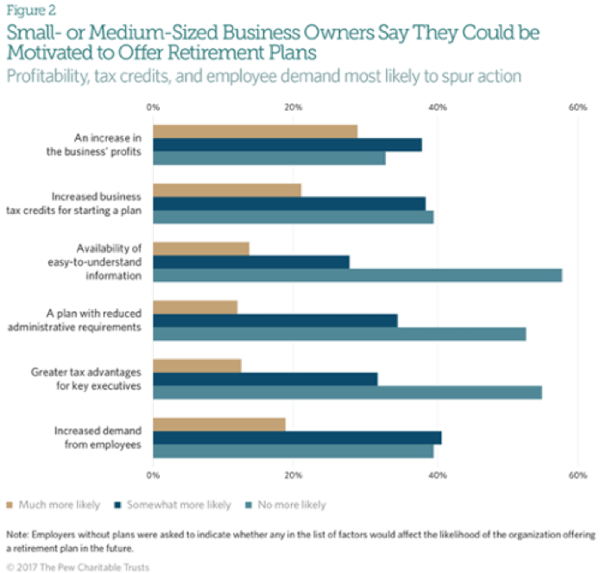 Open MEPs to the rescue! OK, not so much

An MEP is a 401(k) plan that covers the employees of two or more unrelated employers. MEP providers and their investment fund partners claim MEPs plans offer lower 401(k) fees due to “economies of scale.” For decades, trade associations have offered “closed” MEPs to members – which only affiliated employers could join. President Trump and some member of Congress want to make “open” MEPs – which any employer can join – possible. They believe open MEPs will make retirement plans more affordable - motivating more employers to cover their employees with a retirement plan.

I think they’re wrong. In my view, MEPs are more of a marketing gimmick than a way to make retirement plans more affordable because 401(k) plans no longer need lots of assets to pay low fees for top investments. Today, even start-up plans with no assets can pay low fees for the top index funds and ETFs – no economies of scale required.

With no “economies of scale” advantage, I don’t see how MEPs will motivate more retirement plan sponsorship due to their inherent disadvantages:

The Thrift Savings Plan (TSP) is a 401(k)-like plan for Federal workers. With 4.7 million participants and $443 billion in assets, the TSP is the largest defined contribution retirement plan in the United States. It is also the most efficient. TSP participants earn market returns using index funds while paying less than 0.03% of assets each year in plan administration and investment expenses.

Because of the TSP’s great size, no private sector 401(k) plan could ever hope to match its incredibly low expenses, but it is possible for any employer – no matter how small – to have a TSP-like 401(k) plan.  Such plans can deliver reliable market returns, plan design flexibility, and lower fiduciary liability for very low fees. Better still, with just a little small IRS tax credit - $2,000 or less per year – these plans can be “free” to most small employers.

In my view, the combination of TSP-like 401(k) plans and tax credits would do a much better job at motivating retirement plan sponsorship than MEPs.

It’s difficult to make a case for MEPs today!

Wall Street has been lobbying for open MEPs for years now. Big fund companies want them because they are a cheap way to gather assets from small business 401(k) plans. Actively-managed mutual funds have lagged passive index funds in 401(k) plans – especially at the small end of the market - for years now. MEPs are a way for fund companies to offer their funds in less costly share classes while maintaining their margins. The problem? Even low-cost actively-managed funds tend to underperform comparable index funds, net of fees charged.

Without cheaper actively-managed funds achieving greater net-of-fee returns than comparable index funds, the “economies of scale” case for MEPs falls apart. Without it, I think it’s impossible to justify the inherent disadvantages of a MEP.

Simple solutions are often best, and it shouldn’t surprise anyone that commingling the assets of potentially hundreds of unrelated employers in a single trust account doesn’t result in a better retirement plan. TSP-like 401(k) plans a better alternative. They’re not just simple, they’re also more likely to deliver superior returns and reduced fiduciary liability. In my view, if Washington was serious about expanding retirement plan coverage, they’d make these common sense plans free with a tax credit.