The day-to-day operation of all 401(k) plans must be governed by a written plan document that meets Internal Revenue Code requirements. Occasionally, 401(k) plan documents will require an amendment to reflect law changes or employer intentions. The Internal Revenue Service (IRS) has strict rules for plan amendments. It’s important for employers to understand them. Otherwise, they could miss the chance to make discretionary plan changes, accidentally cut back protected benefits, or face punishment for document non-compliance. It’s not difficult for employers to stay out of trouble. While 401(k) amendment rules are strict, they are generally straightforward. Below are some basics.

Under a different IRS rule, employers are allowed to suspend or reduce safe harbor nonelective or matching contributions (as applicable) mid-year if either: (1) they are operating at an “economic loss,” or (2) the safe-harbor notice distributed prior to the start of the year states the following:

If a 401(k) plan is amended to suspend or reduce safe harbor contributions mid-year, the entire year becomes subject to ADP/ACP and top heavy testing.

Confused? Below is a decision tree that can help: 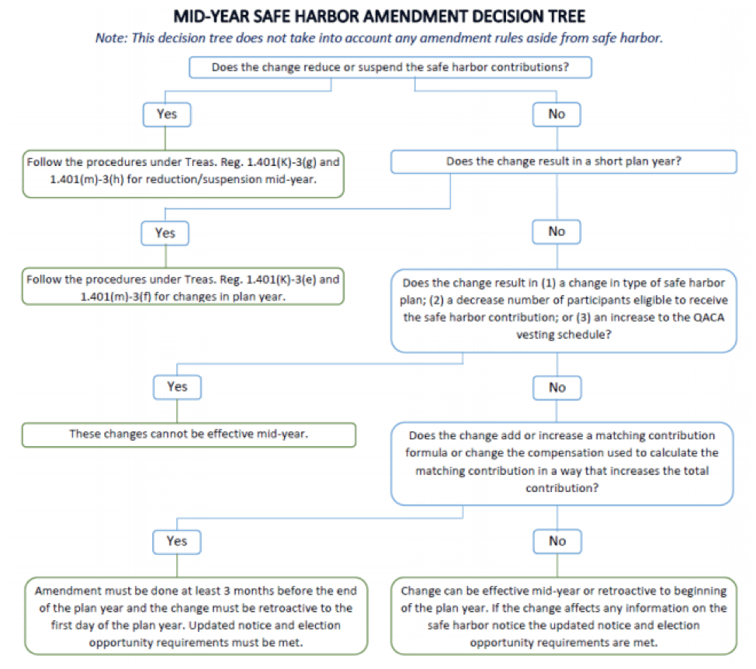 Annual contribution allocations are also covered by the anti-back rules. Once a 401(k) participant satisfies the allocation requirements for a plan year contribution (e.g., 1,000 hours of service), their “allocable share” of that contribution can’t be reduced by mid-year plan amendment.

Non-protected benefits that can be reduced or eliminated by plan amendment at any time include plan eligibility, the right to make salary deferrals, and participant loans.

A late amendment is considered a plan qualification failure by the IRS. That means doing nothing about the issue could potentially lead to plan disqualification. To correct a late amendment properly, employers must follow the terms of the applicable Employee Plans Compliance Resolution System (EPCRS) program:

Staying out of trouble is easy with qualified help!

That said, a quality 401(k) provider can only do so much. It’s up to employers to adopt the interim amendments they receive and to let their provider know when they are considering discretionary plan changes. A basic understanding of 401(k) amendments can help employers to do their part to stay out of trouble.