The 401(k) fiduciary hierarchy includes both fiduciary and non-fiduciary (“ministerial”) roles. In general, the fiduciary roles have discretionary power, while the ministerial roles do not. The named fiduciary sits atop the hierarchy with the power to delegate all other roles.

In most traditional (single-employer) 401(k) plans, the named fiduciary is the employer - which includes controlled groups and affiliated service groups. In a Multiple-Employer Plan (MEP), it is the provider. In a Pooled Employer Plan (PEP), it is the Pooled Plan Provider.

You can delegate any role within the fiduciary hierarchy to a willing 401(k) provider, but there is a catch. You must “monitor” their performance of each role you delegate – to ensure they are doing a competent job for “reasonable” fees. Given this responsibility, I recommend you avoid 401(k) providers with opaque administration services, investments, or fees you don't understand.

An Org Chart of the 401(k) Fiduciary Hierarchy 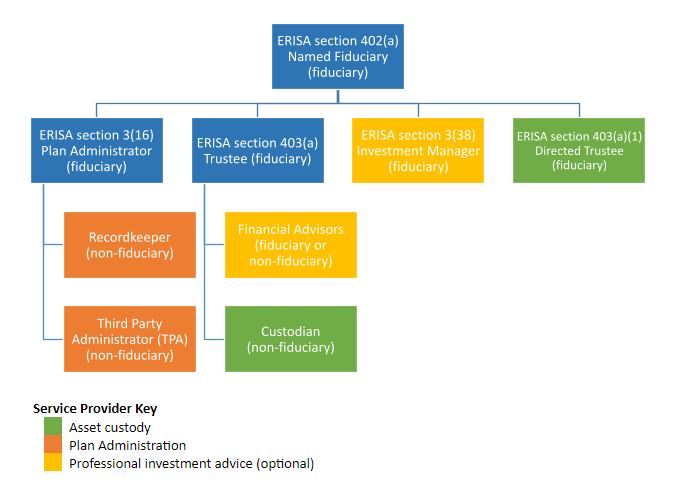 401(k) Plan Oversight Should Not Be Scary!

Employers have a fiduciary responsibility to monitor their 401(k) provider because they are ultimately responsible for protecting the interests of their plan participants. That responsibility can seem scary because failing to meet it can mean personal liability for restoring avoidable participant losses.